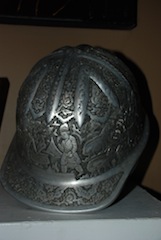 
My grandparents, Doran and Dorothy McEntire, are people you could only hope to know. They have always been the constant in my life of unending change. My mother moved us around a lot, and home, she would say, could be a cardboard box as long as we were together. But there was always one place we could go. One place that would always be a home for us and that was grandma and grandpa's home. They have an underground home on a farm out in the country. Their home is located in the Ozarks of Missouri where they have lived for the past thirty years.

However, they weren't always so grounded. In their younger years they were what some people would call gypsies. Always moving. Always on the go. And over the years of traveling they have collected a trove of experience, knowledge and exciting adventures. I love to hear their stories and listen to their wise words learned through experience. But of all their stories and the many I keep close to my heart there is one that sticks with me. It's the story of the Silver Helmet.

My grandpa is a godly, honest man and he worked hard as an oil rigger for many years to support his family of nine. He took jobs wherever he could find them. Some of the jobs he took often moved him and his family to foreign countries like Ecuador and Guatemala. In 1974 he found work in Tehran, Iran - a country on the verge of a revolution from the Shaw, Mohammed Reza Pahlavi. He worked and lived there with his family for three years.

While he was there he came upon a very talented Iranian Silversmith. Grandpa admired the man's work and asked him if he could decorate his safety helmet. The silversmith set to work, he filled the helmet with tar and then craftfully, he hammered in an intricate mural of shepherds, animals with scenery around it. It was beautiful.

Every once in a while Grandpa would get a break from his work abroad and he would come back home to the states to visit his mom, Hazel and dad, Elzie (my father's namesake). He showed his new helmet to them, proudly sharing the bit of beautiful, Iranian culture he had brought back with him. My great grandpa, Elzie, was very impressed! He said he wished he had a safety helmet like my grandpa's to wear to the oil rig that was drilling on their land. He thought it would be fun to show off to all the riggers.

Inevitably, my grandpa had to return to Tehran. And one day he revisited the silversmith, asking him to make another helmet. A special helmet for his dad. So, again the silversmith set to work. Crafting a helmet made entirely of silver with the same beautiful scene he had hammered on grandpa's helmet. The finished piece was stunning.

Grandpa's visits home to see his parents were rare but he gave the helmet to his father the very next time they met. My great grandpa Elzie was proud to have such a special item. He kept the helmet polished and beautiful at all times.

He died in 1985, two years before I was born. And in 2004 my grandpa passed the silver helmet down to me. I never met my great grandpa but I know he had to be a fantastic man to have raised my grandpa. In a lot of ways I see my great grandpa in me; like the way he would polish his helmet and was so proud of it. He took pride in things, like gifts and what you work for and so do I. I keep the helmet on my mantel above the fireplace and keep it polished just like he did.

Although my great grandpa is gone I can still keep his memory alive. His memory is with the silver helmet. Keeping memories alive is something I am passionate about. Starting around age 10 when I realized there were very few pictures of me as a baby, from then on pictures, stories and heirlooms have meant so much. For their history that will live on as long as we keep it alive.