The Little Town of Alphabet 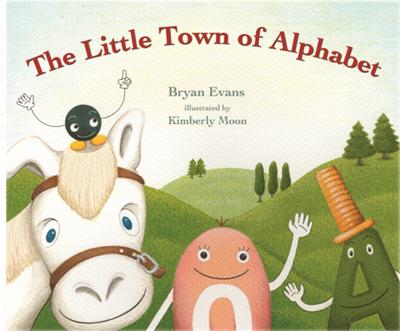 Nestled on a hillside, in a place called Knowledge, is the little town of Alphabet. The people there are called Letters. The Letters spend almost all their time making words.

On the other side of the hill is another little town. The people there are called Numbers.

Although there were ten Numbers in the town, nobody took any notice of the Number Zero because she didn’t amount to anything.

One day, while walking alone in the woods, Zero saw someone approaching, riding a white horse.

“Hello!” said the rider. “My name is Spot! I’m a Dot. I come from the village of Punctuation, in the valley below. I’m on my way to the top of the hill.”

“Hello Spot!” replied Zero. “I’m Zero. Why are you going to the top of the hill?”

“Would you like to come and see?” Spot asked.

“Yes!” said Zero, beginning to wonder for the first time. “I’m afraid Numbers don’t think very much at all. But I’m only a Zero, the lowest of the Numbers. Nobody cares what I think anyway.”

Zero the Number and Spot the Dot were soon on their way to the top of the hill.

“Tell me, Miss Zero, how many Numbers are there in your town?” asked Spot.

“Nine!” she replied. “And me. But nobody counts me, because I don’t amount to anything.”

“Everybody amounts to something. It’s up to each one of us to find out what it is,” said Spot.

Zero thought about that on the way up the hill. When they reached the top, she was astonished to see another little town on the other side of the hill.

“Oh my goodness!” she cried. “I wonder who lives there?”

“We shall soon see,” said Spot, directing the horse down the other side of the hill.

The people of the town were delighted to meet them. They had never seen a Number or a Dot before.

“I am the Mayor of the town of Alphabet. We are called Letters,” said the letter A. “Welcome to our town.”

“Thank you,” said Spot. “Are there many Letters in the town of Alphabet?” Spot asked.

“Miss Zero is from the town of Numbers. Perhaps she can teach you to count,” Spot suggested.

“By joining Numbers together just like Letters do to make words, we can make new Numbers as well,” she said.

“A splendid idea,” said the letter A, clapping his hands.

The place of Knowledge began to grow. New words were created every day and new numbers too. Zero became a hero and a very important Number.

But soon there were too many words and numbers. Where were they going to put them? Zero and Spot and some Letters had a thinking meeting to find a way to solve the problem.

They decided to make new homes for words and numbers and call them Books. And the books would stand side by side in buildings called Libraries. But that was not the end of it.

Books of Knowledge were sent to other places as well. Soon Libraries were built all over the world. Now, people everywhere love to visit Libraries to see what’s inside the wonderful books.

Every day new ideas are formed and new discoveries are made and put into books. But the most important discovery of all began in the little town of Alphabet.

Reading is most important for that is how great treasures are discovered.

Letters and Numbers are very important in the Libraries of Knowledge. But Spot the Dot is the most famous of all, for he has a place in every book in the history of Knowledge.

And all this came about because he wanted to see what was on the other side of the hill.