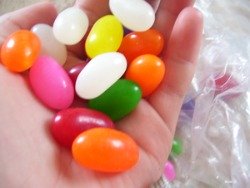 Matthew placed his pot on the front porch. He watered it every morning. He sprinkled it with sugar every afternoon.

Brooke walked by every day. “Jelly beans won’t grow,” she called from the sidewalk.

A week passed. Two weeks passed. Matthew watered his jelly beans and sprinkled them with sugar. Nothing happened.

It had been two weeks and two days. Matthew stepped onto the porch. The morning sun was warm. He lifted his watering can.

“Hey!” Matthew yelled. He dropped to his knees and stared at his pot. Three tiny green shoots had popped through the dirt.

Brooke marched down the street. She glanced up at Matthew. She opened her mouth to call.

Brooke closed her mouth. She climbed the porch steps and stood beside Matthew. She looked at the tiny green plants. Her mouth dropped open again.

“My jelly beans are growing.”

Twice a day, Matthew watered the shoots. He sprinkled sugar on them.

Brooke came to watch. “The plants might grow but you’ll never get jelly beans,” she said.

The shoots grew taller and thicker. They twisted around each other and reached for the sky. Leaves covered the stems. The weeks went by. The plant kept growing but there was no sign of jelly beans.

Brooke stopped coming onto the porch. “You’ll never get jelly beans!” she called from the sidewalk.

It had been two months and two weeks and two days. Matthew stepped onto the porch. The morning sun was cool. Matthew lifted his watering can.

His tree was covered with small colorful flowers. There were hundreds of them.

Brooke marched down the street. “You’ll never get jelly beans,” she called.

Matthew watered his jelly bean tree twice every day. He sprinkled the roots with sugar. The small colorful flowers dropped off and left tiny round beans. They were red, blue, yellow, green and purple. They grew a little bigger each day.

Brooke marched down the street. “You’ll never get jelly beans!” she called.

Brooke climbed onto the porch. Her eyes grew wide as she stared at the tree.

Matthew grinned. He held out a handful of color. “Want a jelly bean?”