The Bad Little Bears Get A Bath 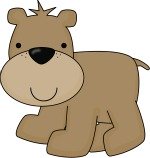 It was a warm, sunny day. Birds were singing, butterflies were flittering, and Mamma Bear decided it was the perfect time for her to take a bath.

As she turned on her bath water, her three little bears arrived.

"What'cha doing, Mamma?" asked Bartlet Bear, who was the biggest, but not by much.

"What'cha doing Mamma?" asked Bennington Bear, who was the furriest, but not by much.

"Yeah, me too?" asked little Buttercup Bear, who was the smallest, and the cutest, but only by a little bit.

"I'm going to take a nice, hot, relaxing bath," Mamma Bear said. "And while it's getting ready, I'm going down by the river and pick some berries and nuts for lunch.

"Can we come to?" Bartlett Bear asked.

"Can we, please?" Bennington Bear asked.

"Not this time," Mamma Bear said. "I need you three little bears to stay here and watch the bath water, and make sure nothing bad happens to it, okay?"

"And remember, this is my bath water, not yours. No matter what happens, I don't want you, or you, or especially you (which made little Buttercup Bear giggle) getting wet.
Understood?"

Mamma Bear walked down to the river.

When the bath tub was full, Bartlett Bear, who was not only the biggest, but the oldest, turned off the water.

Bennington Bear got the soap and put it in the tub.

"I wonder if the water is too hot for Mamma Bear?" she asked.

The little bears looked at her other.

"I'll check it," Bartlett Bear said, "Because I'm the biggest," and he jumped right in.

"I'd better check too," Bennington Bear said, "because I'm the furriest," and he jumped right in.

Little Buttercup Bear gathered up all her bath toys. "And I'd better check it too," she giggled, "because I have the toys!" And she jumped in too, splashing lots of water in lots of places.

They played; they laughed and they put soap all over each other. Then they splashed, and laughed, and all the soap washed off.

"Well now, what's this?" Mamma Bear said when she returned.

Mamma Bear looked at each of them.  "Whose idea was this?" she asked sternly.

"It was my idea," Bartlett Bear said, because he was the biggest.

"No, it was my idea," said Bennington Bear, because he was the furriest, so he was also the wettest.

"Yeah," little Buttercup Bear said, "It was my idea. I brought the toys."

"But?" Mamma Bear began, "You are clean little bears, and that makes me happy."

She lifted each wet little bear out of the tub and hugged them one by one. Then she dried them, and dried herself.

"Now," Mamma Bear said, "Since you've had your baths, I'm going to go out and pick some flowers for the flower boxes. I've put the berries and nuts on the table, but I don't want you to eat them, okay?"

So Mamma Bear smiled and went back outside, and the bad little bears ran right to the table.