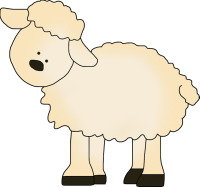 Aaron lay close to his father to stay warm in the cold night air. Nonetheless, a shiver went through Aaron. He wanted desperately to be like his father, able to call to the sheep. Many times, he tried to call to them, but the words never came. He only could make strange sounds that no one could understand. Sometimes, Aaron would see tears in his father's eyes when he tried
to speak. He felt that his father was disappointed in him. He would never be a shepherd.

"Aaron, why are you so restless? It's time to sleep," Aaron's father said as he stroked his son's hair.

Aaron tried to sleep, but all he could see was the sadness in his father's eyes. If only he could talk! His father would be so pleased with him.

After awhile, Aaron's eyes grew heavy and he fell asleep. He dreamed that he was able to speak. When he called his sheep, they followed after him. His father's eyes were free from tears.

Suddenly, Aaron was awakened by a brilliant light in the heavens. Aaron's father held Aaron close to him.

They both huddled together in fear.

An angel appeared to them and said," Do not be afraid. I bring you news of great joy. The Christ Child has been born tonight in Bethlehem. You will find Him wrapped in a blanket, lying in a manger."

Aaron couldn't wait to see the Christ Child. He tugged at his father's sleeve and pointed towards Bethlehem.

"Let us go to Bethlehem and see the Christ Child."

In great excitement, they hurried to Bethlehem with their sheep following behind them.

When they found the manger, Aaron was afraid to come inside. He felt he wasn't worthy enough to see the Christ Child. With all his heart, he wanted to say happy birthday to the Christ Child but he knew he wouldn't be able to say even a single word to Him.

Aaron's father, seeing the fear on his son's face said,"Don't be afraid. Our Savior wants your love not your words."

Aaron held his father's hand. They knelt in
adoration before the Christ Child. As Aaron looked upon the Christ Child, all of his fear left him. How he wanted to be able to wish the Christ Child happy birthday. Suddenly Aaron felt his words ready to burst forth.

"Happy Birthday!" Aaron shouted to the Christ
Child. Tears of joy came to his father's eyes and he embraced his son.

"I love you, Father," Aaron exclaimed.

Overjoyed, Aaron and his father went back to their fields. Aaron spent the rest of his life telling everyone about the birth of the Christ Child and how he once had been a silent shepherd.