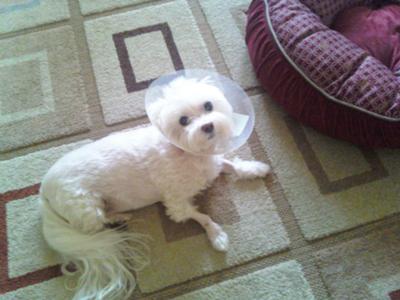 The boy jerked up, dropping his joystick. "America!" he cried. "You've got to stop doing that. Can't you just bark like other dogs?"

The small white dog cocked his head and raised a furry brow. You tell me one other dog that relies on barking when thought transference works so much better.

"Well, my grandperson tells me back before his family migrated to REMUS, dogs barked, cats meowed and birds chirped." The boy spoke the words out loud, then muttered under his breath, "That must have been weird."

The majestic dog shook his small head and trotted around front to stand before his master. His mouth spread into a toothy grin. My grandsire told me dogs have always had the gift; but when he passed, there were only a handful of humans transferring and receiving. That number has slowly risen, but it's hard to teach an old human new tricks, if you know what I mean. The dog threw back his head and laughed.

"You're just a riot, aren't you?" the boy asked. "Too bad you haven't grown thumbs so you could master the art of opening doorways, too." The boy paused his game and rose to his feet. "Say, what's up with you wanting to go out so much, anyway? You got a canine crush somewhere?"

America lowered his head and growled. Yeah, I've got my eye on the Poodle next door. Can we go out or what?

Ryker touched his ear pod and bobbed his head in rhythm to the music. He walked to the large door; but before opening it, he paused and turned to America, so named by his grandperson for the homeland of his ancestors, and transferred a message: I'll receive a flying license tomorrow, you know. I'm hoping my guiders buy me a Personal Flying Vehicle for my birth anniversary. You haven't heard them talking, by any chance?

I want an elevating carpet, too, the dog transferred back, but so far I'm still walking on all fours.

America padded through the opening. Shards of light bounced off his silky fur, his tiny body glistening in the bright light that beamed continuously on REMUS, the planet closest to the sun in the Gilmore galaxy.

Ryker followed the white dog outdoors. "Grandperson says canines are supposed to walk on all fours," Ryker said. "He still gets zoid-out whenever he sees one walking upright, but I guess if given the option, I'd never go back to crawling. Grandpa's just old-standard."

The scream split the air and time froze as Ryker willed his senses to locate the scream. "Here watch my Rammoth, but don't answer it," he told the dog. "Last time Spinner called you barked in his ear and he couldn't hear for hours." Ryker raced across the smooth granite toward the desperate plea.

It's not my fault you humans still use celluloids to talk to each other. I haven't even told you about canine body transference yet, America thought.

At the end of the street, Ryker recognized the lady who lived on the next block. A figure dressed in travel clothes stood by her side, one hand extended as if he intended to grab the lady.

"Stop! You mutant! Release her," Ryker shouted as he raced to help his neighbor.

The boy turned to Ryker. "Dude, I just need change."

Ryker had read about these illegal aliens on the Galaxynet. When their planet Earth enacted a forced lottery system to ration water, many had migrated to other planets within their own solar system. Lately, some had even found their way to REMUS.

The podcast said many were from the map point known as New York. No matter where they hailed from, Ryker didn't want their kind here.

"Lady, are you hurt?" Ryker asked.

"I, ah, no. He just startled me when he spoke." She turned to her 'abductor'. "How dare you approach me!"

"I asked if you would change a six coin. I need to buy water to drink." The hirsute stranger stuck out a grimy hand.

"I certainly can not," the ladyperson said, "I need my change for the shuttle to the moon."

"Do you have papers?" Ryker asked. "Only aliens with papers are allowed in our galaxy."

The stranger shrugged. "I've applied, but because I'm from Earth, the waiting list is two-years long. I came here to buy water for my family. I'm willing to work?"

"NO!" Ryker yelled. He thrust an arm straight out and pointed off into the distance. "Take your family and leave. Never venture back. You're not wanted." Ryker spat on the ground before turning to the ladyperson, "You sure you're safe?"

I'm safe, she transferred, but REMUS isn't the same since the illegal aliens discovered our planet. I wish they'd deport the entire lot.

Ryker transferred back: My grandperson remembers hearing his sire talk about a similar situation on Earth. He says his ancestors helped to build walls to strengthen the borders, but nothing worked. The illegal aliens still came.

The ladyperson squinted into Ryker's eyes and sent this message: I read in history books the landowners then built safe-havens and stored up supplies to force them out. My own ancestors believe that's when the water began to dry up. Instead of preserving and protecting, the people horded.

Ryker added: Grandperson says his family worked to preserve the Earth. He still has compassion for Americans. As for me, I think they should round them up and send them home.

The ladyperson replied: These aliens certainly won't share my water. My ancestors transported green ground-cover from Earth; it's all I can do to keep it watered. She turned and strolled toward her station.

Ryker shrugged his shoulders and headed toward home. He glanced back once to the American immigrant, scorn written all over his face.