Pu: or How the Skunk Got Its' Stripe and Stink 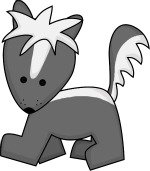 Skunk with his new stripe and stink!


Once there were four great forest friends.
This was a very long time ago.
They lived near a leafy and enchanting wood,
And their names you surely know.

Living in this lovely land
By a clear and flowing stream,
There was a Squirrel, Sparrow and Rabbit;
A tight-knit animal team.

They all had daily duties to perform,
To make their lives a breeze,
All pulled their weight except young Skunk,
He preferred a lazy life of ease.

Squirrel did all the cooking.
He could prepare the most delicious dish.
From slug soufflé to spider smoothies,
Everyone agreed the food was tasty and scrumptious.

Rabbit was in charge of burrow cleaning.
Their home always looked so nice and neat,
And even if visitors like earthworm had none,
Upon entering she made them wipe their feet.
And we can’t forget dear Sparrow.
He was the look-out high up in the trees.
He watched all day for wolves, bears and foxes,
And reported danger that friends below couldn’t see.

Now our last friend to mention,
Oh, how he loved to spend his days,
Being pesky, sneaky and tricky,
And scaring his friends in frightening ways.

This sly mammal’s name was Skunk,
And he was the most beautiful creature for miles.
His shiny coat was black from nose to toes,
And it brought many oohs, aahs, and smiles.

And goodness gracious--his tail!
It was a breath-taking sight for sure.
He brushed it over 200 times a day,
And perfumed it with Calvin Klein for Fur.

Yes, Skunk surely loved his looks,
And he also loved playing terrifying tricks
On all his hard-working woodland friends,
So they knew this behavior they must fix.

After Rabbit, Squirrel and Sparrow
Had eaten supper in the fading evening light,
They remembered all the many, many times
Skunk had caused them a horrible fright.

“Remember when he jumped out of the burrow,” said Sparrow
“And caused me to give a loud shriek?
Why, I had to postpone my lookout duties
Because I had laryngitis for a week!”

“What about when he dressed up,” remarked Rabbit,
“Last Friday night as a grizzly bear?
He dove into the burrow roaring,
And I nearly had to change my underwear!”

“I still remember when he saw me,” said Squirrel,
“As I was scurrying up a tall pine tree.
He gave such a horrible, piercing squeal,
That I soon felt the pain of gravity!

When they finished their conversation that evening,
They discussed how to make their skunky problem end,
And all three friends finally came to agree,
That the forest King must have help to lend!

“Yes, we surely must do something soon,
To end Skunk’s scaring once and for all,
For if we leave this problem alone,
We’ll all end up in Forest View Hospital!”

So the three hopeful friends set off to find,
The wise and witty forest king,
And they soon found him perched on a thick oak branch,
Massaging an old and aching wing.

They explained their daily dilemmas,
And the old Owl King soon thought,
That he must teach Skunk a lasting lesson,
One that would not be soon forgot.

“I’ll make him easy for all to spot,
So he can’t catch you off guard.
My magic will paint him two bright, white stripes,
So seeing him from a distance won’t be hard.”

“And we must make him pay for all his meanness,
By changing his beloved and beautiful tail.
From now on when he is scared or startled,
It will produce a foul and stinky smell.”

So because of the Owl King’s ancient magic,
Skunk awoke bright and early the next day,
And found as he was brushing his beautiful tail,
That he didn’t look the same way.

He was shocked to see two broad white stripes,
Running from his tail up to his head,
And he knew now that scaring would be harder,
He might as well have been painted red!

But he was not so very discouraged.
Two white stripes were not that bad.
They would just make scaring a challenge,
So he turned his frown around and was glad.

Off he scampered through the dewy woods,
To find a place to hide and scare,
When suddenly Rabbit jumped from behind a juniper bush,
And Skunk leapt nearly a foot in the air.

When he landed on the ground again,
He smelled an awful, disgusting stink!
It was like old garbage in a trashcan,
And then Rabbit gave him a wink.

That nasty odor is from your beloved tail,
And it came out because I frightened you,
Now any time that you scare your friends,
We’ll do the same and you’ll be in a cloud of P.U.

“What do you mean? What’s this about?
And why has this happened just to me?”
So the animals explained the magic and change,
And Skunk finally agreed to be scare-free.

Although he was a much better friend,
And his popularity peaked,
He had to buy everyone nose clothespins,
In case his tail-smell accidentally leaked!

So today if you see a white-striped skunk,
Crossing the road in your way,
Be sure to give him lots of room,
And for goodness sakes, don’t scream, “Hey!”

The moral of the story:
Don’t ever scare your friends or family,
And always work hard at what you do.
Or else some eerie old owl magic,
May make you smell like an old shoe.