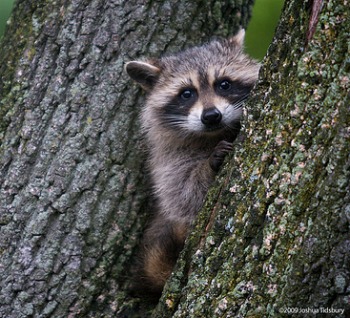 Listen and read along to Monty's Big Decision, a funny story about the election process. Teach kids this complicated matter as Monty tries to distinguish between political parties, polls and platforms.

There was shouting in the treetops and hollering in the mountains. There was buzzing along the ant trails and down in the rabbit holes.

It was time to choose a new president and the forest was humming with excitement.
“The election is here!” the animals shouted. “Who will you vote for?” they asked each other.

Monty the raccoon heard talk about candidates and conventions, caucuses and campaigns. But while everyone else discussed and debated, Monty was quiet.

“I don’t know who to vote for,” Monty said worriedly.

Monty decided he needed some help. So, he dashed off to find Scotty, the Beaver.

“You need to learn about parties,” Scotty said, the water spraying from his fur as he laughed. "Parties will help you decide who to vote for.”

So Monty went to Badger’s birthday party. Monty played games. He wore a festive party hat. He ate cake. When it was all over, he knew that parties were fun, but he didn’t know who to vote for.

Off he scurried to talk to Henry, the squirrel. “Not those kinds of parties,” Henry said, his nose twitching with laughter. "Political parties.”

“But what are political parties?” Monty asked.

“Political Parties are groups of people who have the same ideas about how our country should be governed or ruled,” Henry told him.

“Political parties are an important part of deciding who to vote for,” Henry said, “but you also need to find out about platforms. Platforms will tell you what each person wants to do as president. Then you can decide who to vote for.”

So Monty went to the largest platform he could find, the town stage. He felt big. He felt tall. He did a little dance and sang a little song.

When he was finished, he knew platforms were great places to sing and dance, but he still didn’t know who to vote for.

So Monty strode off to talk to Fred, the bear. “Not those kinds of platforms!” Fred said shaking his big furry head. "Platforms are the ideas that a candidate has, or stands on about different things,” Fred said. “Parties and platforms are important in deciding who to vote for, but you also need to know about the polls. The polls will tell you who is winning.”

“This is harder than I thought,” said Monty.

Finally, Monty trudged over to see Rose, the Eagle.

He found her in a giant nest of sticks in the tallest tree in the forest.

He told Rose what he had learned, she flew down and said, “Not those kinds of polls. The polls in an election tell who is winning and who is losing before everyone gets to cast their vote.”

“It’s all so confusing.” Monty complained.

“Yes it can be confusing, but it’s very important.” Rose said. “Parties give us ideas about what the candidates believe. Platforms tell us what each candidate wants to do for our country. And polls give us information about who people are voting for.”

“Now I know those things are important,” said Monty, “but I still don’t know who to vote for.”

“Go out and listen,” Rose said as she flew away. “Then you will know just what to do.”

So Monty went to the political parties and listened. Then he went to listen to the candidates speak about their platforms. Finally, Monty listened to the polls. And little by little he made up his mind. Finally the day came to cast his vote.

“Deciding who to vote for was a big decision,” he told his parents.

“That’s great son,” said his dad. “Next you can vote for the governor.”

And the shouting and hollering and buzzing began once more.

To read more of Erin's work visit her blog, Coloring Outside the Lines.