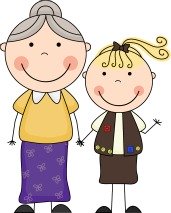 "What a pretty day!" said Grandma.

On their way to the park, they stopped at the store.

"We'll just pop in for a few supplies," Grandma said.

Lucy and Grandma held hands in the store. Grandma's fingernails were pearly-smooth and her sandals made a happy sound on the floor.

"What should we get for our picnic?" asked Grandma.

"Why do we need magazines?" asked Grandma.

"In case there are no people to watch," Lucy explained.

"Alright," said Grandma. "What else do we need?"

"Whatever for?" asked Grandma.

"In case people want to watch us," said Lucy.

"Alright. What else should we get?" asked Grandma.

"But it's not raining," said Grandma.

"But we can hide behind it," said Lucy.

"What will we be hiding from?" asked Grandma.

"Good point," said Grandma. "What color should our umbrella be?"

Together, Grandma and Lucy filled their cart with magazines and a hula hoop and a pink umbrella. Then they picked out their picnic food. They chose apples and cheese and pickles and a tiny loaf of bread with little black seeds sprinkled all over the crust.

"Do you think that's everything?" asked Grandma.

"What did we forget?" asked Grandma.

"Oh, but it's such a warm day, the ice cream would melt before we got to the park," said Grandma.

"Lucy, I like the way you think," said Grandma.

"I like the way you think too, Grandma," said Lucy.

Lucy and Grandma were still licking ice cream off of their fingers when they got to the park. They saw a fountain, a bench, and a garden blossoming with pink and yellow and red and tangerine-colored roses.

"Where should we sit?" asked Grandma.

"By the pink roses," said Lucy.

Grandma followed Lucy to the spot where the pink roses grew. They buried their noses in the blossoms.

"Ummm," Lucy agreed. "They smell as good as you, Grandma!"

Grandma laughed and spread out a polka dotted blanket. Then she and Lucy ate the apples and cheese and pickles and the tiny loaf of bread with the little black seeds sprinkled all over the crust.

"Do you want the hula hoop, Grandma?" offered Lucy.

"Alright," Grandma said. She slipped the hula hoop over her head and started to move her hips like a professional hula dancer. Round and round she made the hoop swing on her waist.

They crouched behind the pink umbrella until they were sure that the shark was gone.

"I guess we fooled him," said Grandma.

Lucy giggled. "I guess we did."

Together they shook the crumbs off of the polka dotted blanket.

"What a wonderful picnic," said Grandma.

"Let's have another one tomorrow!" said Lucy.