Charlotte and the Big Red Lobster 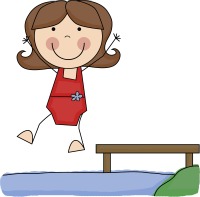 "Can we go to the beach today?" Charlotte asked her Mommy and Daddy.

"Yay!" Charlotte laughed and clapped her hands. Charlotte ran to get her blue sandpail and told her toys Mermaid, Octopus and Turtle about going to the beach.

"Will you build a sandcastle?" asked Mermaid.

"Yes. Daddy and I are going to build a big sandcastle!" said Charlotte.

"Will it be big enough for all of us to play in?" asked Octopus.

Charlotte couldn't wait to go. She hopped up and down in her pink flip flops. "Let's go Mommy!" She pulled on Mommy's arm.

"One minute Charlotte," said Mommy. "You have to put on your beach hat. You don't want to end up looking like a red lobster do you?"

Then he opened his eyes as wide as he could and pretended his hands were big, sharp, snapping claws. He chased Charlotte around the car. Charlotte squealed and ran away.

"Daddy!" Charlotte giggled. "You're being a silly red lobster!"

When they got to the beach, Charlotte looked inside the sandpail to make sure that Mermaid, Octopus and Turtle hadn't fallen out in the car.

"Are we there yet?" asked Mermaid hopping up to see over the rim of the pail.

"I think I can smell the ocean," Octopus said waving his long tentacles around.

Charlotte's Mommy began to set up the beach umbrellas.

"Is it going to rain?" Charlotte asked. She looked at the sky to see if there were any rain clouds.

"No," said Mommy. "The umbrellas block the sun's rays from us so that we don't burn our skin and get all red."

"So that we don't look like red lobsters?" asked Charlotte.

Daddy opened his eyes really wide and made his hands into claws again.

"Daddy!" said Charlotte. "I don't like red lobsters, they're scary."

"Yes, red lobsters can be scary," Daddy frowned. "But, if you ever see one, all you have to do is make a really scary monster face at it and it will run away!"

"Why?" asked Charlotte. She wasn't sure that would work.

"Okay!" said Charlotte and she picked up her pail and shovel and began to dig in the sand.

"This is a very big sandcastle," Daddy said looking at it. Then he looked at Charlotte.

"I think we can make a door big enough for you to crawl through. What do you think??" Charlotte nodded.

Daddy dug out a door just big enough for Charlotte in the sandcastle's wall. Then she gathered up Mermaid, Octopus and Turtle and they all crawled inside.

"Let's go exploring!" said Octopus and he slithered quickly around the castle on his eight legs.

"Wait for me!" said Turtle and he crawled after Octopus on the sandy floor.

Mermaid hopped up and down on the tip of her fishy tail and clapped her hands. "This is a lovely sandcastle," she said to Charlotte.

Charlotte laughed. She thought so too.

"Hey, everyone!" Turtle called out, "I found some stairs!"

"Stairs? In a sandcastle?" asked Octopus. He zipped over to Turtle for a better look. Turtle was at the top of a long set of sandy stairs. It was dark at the bottom.

"But it looks scary down there," said Mermaid in a small voice. She hopped closer to Charlotte.

Charlotte went down the stairs with Mermaid, Octopus and Turtle following closely behind. At the bottom all they saw was more sand.

"No treasure." Octopus kicked the sand.

"Are you sure?" asked Turtle, stretching out his long neck. "Maybe we should look around a little bit further?"

"What was that?" Mermaid whispered. She moved closer to Charlotte again.

Charlotte turned around and saw a Big Red Lobster! It looked just like Daddy said it would. It had a long tail, large eyes and big, sharp claws that were snapping at them.

Mermaid, Octopus and Turtle all screamed and ran behind Charlotte.

The Big Red Lobster's big, sharp claws kept snapping at them. It took a step closer. Charlotte was scared but then she remembered what her Daddy told her.

"It's okay," Charlotte whispered to her friends. "Remember what Daddy said? I just have to make a scary monster face and it will run away."

So Charlotte made the scariest, spookiest, creepiest monster face she knew how to.

"Ahhhh!" The Big Red Lobster yelled when it saw the monster face. Then it turned and scuttled away.

"Yay, you did it!" said Mermaid. "You scared the Big Red Lobster away!" She hopped up and down and hugged Charlotte.

"Maybe we should go now," said Turtle and he began inching closer to the stairs. "What if there are more?"

Just then they all heard someone crying. The sound was coming from behind the stairs.

Charlotte tiptoed behind the stairs and there she saw the Big Red Lobster crying big wet tears.

"Your monster face scared me," said the Big Red Lobster and he sniffed loudly. "All I wanted to do was play with you."

"I'm sorry," said Charlotte. "We were scared because you are so big and you look so different than us."

Mermaid, Octopus and Turtle all nodded.

"But we're not scared anymore," said Mermaid. "Would you like to play?"

Charlotte and her friends and the Big Red Lobster happily played together for the rest of the day until Charlotte heard her Mommy and Daddy calling to her. It was time to go home.

"I saw a Big Red Lobster!" Charlotte told her Daddy on their walk back to the car.

"Really?" asked Daddy smiling. "So what did you do?"

"I made a very scary monster face, just like you told me too, and it scared the Big Red Lobster away."

"Yes, but then it started crying."

"Yes," Charlotte nodded her head. "It was crying because it just wanted to play with me, not scare me."

"After I saw how sad the Big Red Lobster was, I wasn't scared anymore. So I said that I was sorry for making the scary monster face. And then we all played together!"

"That was very nice Charlotte," said Daddy. "Sometimes it's hard to remember that even though people who look different from you or your friends might look scary, they are just like you or me!"