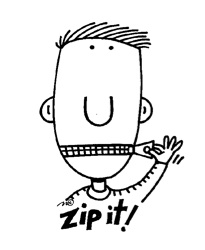 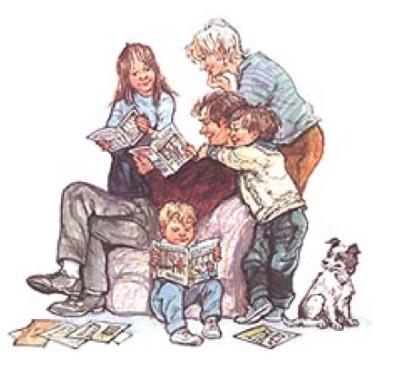 The Readalouds were a family of eight. They had a problem, they loved to read together, out loud, in the same room, at the same time. It was so noisy, none of them could understand what they were reading. Even their dog, Story, barked the entire time because he couldn’t sleep with all the racket. This made them all sad and they never smiled. Story never smiled either.

They all put down their books and looked at him.

He continued, “No one can read one more word until we find a solution to our reading-out-loud problem. Does anybody have a good idea?”

No one said a thing. Deborah rolled her eyes.

Clifford, the middle boy, said, “Let’s read books that only have pictures.”

Nobody said a thing. Mother tried not to laugh.

Deborah, the middle girl, said, “Let’s pass a hot potato around the room. You can only read when you are holding the hot potato.”

Nobody said anything. Edmund snickered through his nose.

Story stood on his hind legs, put his paws over his floppy ears, and made a dog-humming sound.

Nobody said anything, but Bridget giggled quietly.

Edmund, the oldest boy, said, “Let’s read books that are written in different languages. That way we won’t understand what every one else is reading.”

No one said a single thing. Andrew scratched his head and frowned.

Francis, the oldest girl, said, “Let’s buy eight small tents and put them up in the same room.”

No one spoke up. Francis was embarrassed and turned red.

Mother said, “Let’s pretend we're in a library but there is no librarian to tell us, Shhhh, be quiet.”

Not one person said anything. Clifford put his finger up to his mouth and went Shhhh.

Andrew, the youngest boy, said, “Let’s learn to read with our mouths closed. I can make lip zippers for everyone.”

Everyone clapped and cheered, and Story barked happily.

The family waited while Andrew custom-made lip zippers for everyone. The family began practicing until they could read with their mouths closed. The Readaloud family could now happily read together, in the same room, at the same time, with big smiles on their zipped lips.

But best of all, Story didn’t bark anymore because he took turns sleeping at the feet of each member of the Readaloud family.