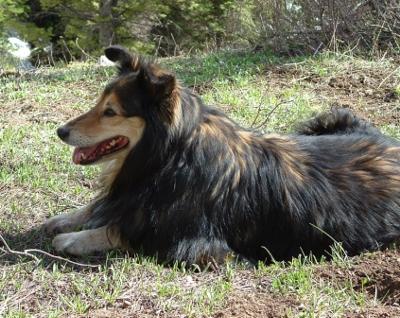 The sign reading “Welcome to Culpepper” flashed by the window.

Polly slumped deeper into the backseat as her father slowed the car and flicked on the turn signal. “More like Dull-pepper,” Polly muttered. Her mother peered at her over the headrest.

“That’s enough of that, Polly Anne. Your father and I looked for a long time to find this place. Try to be optimistic. At least you’re getting that dog you’ve always wanted,” Mom said.

Polly rolled her eyes and thought, “he’s not my dog.”

“What kind of people leave their dog behind when they move anyway?” she asked.

Polly sat up quickly but only caught a glimpse of a fluffy brown tail disappearing underneath her new home.

Dad stopped the car in the driveway. “I guess he’s a little skittish,” he said. “Why don’t you go see if you can make friends with him while Mom and I do some unpacking.”

Polly walked toward the house and crouched down. She could just make out a pair of eyes studying her from within the darkness under the porch. “Hey there buddy,” Polly crooned softly, patting her knee. The dog scooted further under cover. Polly continued talking gently to him, but he moved deeper into the shadows until she could no longer see him.

Polly stood up, put her hands on her hips, and stared under the porch. “Maybe he’s hungry,” she thought and headed for the kitchen. After a few minutes of searching through boxes, she found a bag of dog food and a plastic bowl.

Kneeling in front of the dog’s hiding place, Polly rattled the food inside the bowl. Nothing happened. She sang “come out, come out wherever you are.” Silence. She tried tossing pieces of food under the porch, but the dog didn’t budge. As it began to get dark, Polly sighed and placed the bowl on the ground. Calling out, “Have a good night Porch Dog,” she went inside to start unpacking her things.

Over the next two weeks, Polly didn’t see much more of her new dog than she did on that first evening. If he happened to be in the yard when she opened the back door, he slipped under the porch before she could make it down the stairs. Every day she tried to coax him out, even offering him table scraps that she had smuggled from the house, but nothing worked.

Finally, after spending most of an afternoon lying in the dirt waving a piece of grilled cheese sandwich under the porch, Polly’s frustration got the better of her. She threw the treat on the ground and hollered “I don’t care if you stay under there forever!”

Polly stomped into the kitchen and slammed the door. Mom was arranging knick-knacks on top of the cupboards. “No luck with Porch Dog?” she asked.

Glaring at her, Polly snapped, “I just want my book.” Finding it, she marched back out into the yard. Sitting down and leaning against a tree, she began to read. Soon, the warm sunshine and the droning of cicadas lulled her to sleep.

Polly’s eyes flew open. She had the eerie feeling that someone was watching her. She glanced at the house, but her parents were nowhere to be seen. Surveying the yard, she eventually spotted a nose peeking out from under the porch. Polly pretended to go back to sleep but watched through slitted eyes as the rest of the dog’s head emerged.

He gazed at her with his ears pricked forward. Polly didn’t move. He crept out from under the porch. Polly held her breath. He stood, hesitated for a moment, and then shook himself off and walked over to where she was sitting. Polly looked up and grinned. The dog began to wag his tail and seemed to smile back at her.

“It’s about time,” Polly laughed. “I’ve been thinking. How about we call you P.D. from now on? We can tell everyone it stands for ‘Polly’s Dog.’”