The Dog and His Girl 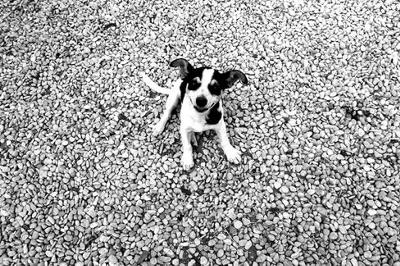 One day this past summer I was walking to the park and saw a little dog all by itself walking the same way. He was black and white with a spot of brown on his tail. I went cautiously toward him and held out a piece of a cookie I had been eating. When he took it he was close enough to pet. His fur was matted and it looked like he'd been lost a long time or he wasn't being taken care of. He didn't have a collar on either. I didn't want him to get hit by a car so I coaxed him along with me to the park. He was kind of shy at first but stayed close to me at the park, I think he was waiting for another cookie!

I talked to him and played with him for a couple of hours. While we played I called him by all sorts of names, but when I called him Jack he came running right to me like that was his name. So I guess it was.

I took him home with me, well actually, he followed me home hoping for another cookie I think. As soon as we reached the backyard I got out the hose and a big tub from the garage and gave him a much needed bath! He really didn't like it at all and kept jumping out of the tub.

My mom heard all the commotion and came out to see what was going on. I thought she'd be mad but Jack hopped out of the tub and went running up to her then sat at her feet so politely all she could do was laugh.

We called the humane society after we got Jack all cleaned up but nobody had reported a dog like him missing. Mom said we should put fliers up to see if anyone in the area had lost him. I didn't want to cause I wanted to keep him, but I knew that if I had lost my dog I'd want the person who found him to try and find his home.

So we took a picture of Jack and made up some fliers to put around the neighborhood. Jack followed us all over, probably wondering what we were doing with all those papers.

A week went by and we didn't have even one call about Jack. By then he already felt like my dog and I prayed that mom would let me keep him.

I was so afraid to ask her because I didn't want the answer to be no. She called me into the kitchen and gave me this whole speech about how much responsibility a dog was and how expensive. I knew she was going to say no, but she completely surprised me when she said that as long as I was up to the challenge that I could keep him!

That's when the phone rang. Mom had a weird look on her face while she was talking and from her side of the conversation I knew it was someone calling about Jack.

When Mom hung up the phone she broke the news to me. A man from a nearby town had seen the flier, he'd been missing his dog for a few weeks and thought Jack was him. He was going to come over that afternoon!

I was just sick! I knew it was the right thing to do to give Jack back to his owner but mom had just said I could keep him. Waiting for the guy to come get Jack was the longest, worst morning ever.

The man pulled up right after lunch - I thought I was going to lose mine! We met him in the yard and Jack went out with us. I thought Jack would be all happy to see the man but he just sat at my feet looking at the man like, "Who's that visitor?" The man came over to Jack, but he called him Pumpkin. He rubbed Jack behind the ears and talked to him real nice. He was a nice man and deserved to have his dog back. I was trying so hard to hold back my tears.

The man stood up with a real sad look on his face. He said,"I thought for sure from the picture on the flier that you had found Pumpkin, but that's not her. Thanks for letting me come look." He walked back out to his truck looking so sad.

I felt funny inside, both happy that Jack was still here and sick that the man hadn't found his dog.

Mom said, "Well I guess you have yourself a dog, we better go take all the fliers down!"

The next day Jack and I went all over the neighborhood taking down the fliers we had posted. On the way back through the park Jack kept running over to a bush and running back to me over and over again. I thought he was playing a game but he wouldn't stop. I went over to the bush to see if there was a frisbee or a ball in it that he wanted, but what I saw wasn't a toy it was a dog! Is was very scared and wouldn't come out from under the bush. I remembered that I had a piece of a candy bar in my pocket and tried to coax the dog out with it. It took awhile but finally the puppy came out from the bush for a piece of the candy and I was surprised to see it looked like Jack's twin and it was a girl! I picked her up and Jack and I ran home as fast as we could.

That afternoon when the man in the truck pulled up I wasn't sick at all - I was so excited! When he came into the yard and shouted, "Pumpkin!" the little dog that looked just like Jack went running up to him!

The man was so grateful that we found his dog he gave me $20! Mom took me to the pet store and I spent the money on toys for Jack and his own collar and tag that read "Jack".