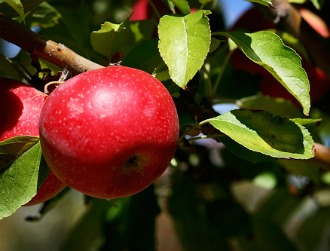 Read along or listen to a story about Pedro and his encounter with the Tarahumaras, who are a Native American Indian tribe that live in Mexico. Or listen on the go - download by right clicking and saving.


After spending much of the night listening to his uncle coughing, Pedro left his casa with a heavy heart. His uncle, Tio Elisio, had returned from the harvesting fields of Texas bringing with him the coughing sickness.

Pedro admired his new pocket watch, smiling as the early morning sun glinted off the gold metal. And to think, his uncle had traded special Apache arrowheads to bring this gift to him. Pedro would be the envy of everyone. But how could he think of himself when his uncle needed his help?

Rumor had it that magic apples grew in the orchards of the Copper Canyon; apples with the power to heal. The Tarahumara Indians owned the orchards, but Pedro had heard the apples were there for the taking. Mama had sent him to find them.

On the road, Pedro passed the village church. He noticed the Padre struggling to lift a water bucket from a well. "Let me help you, Padre. Maybe our strength together can pull the bucket up."

"Gracias, Pedro," the priest said. "You look troubled. Anything I can do?"

"I'm traveling to the valleys of the Copper Canyon to find magic apples. My uncle suffers from the coughing sickness. He needs them to get well, but the orchards look too far for one day's travel."

"I've seen you run, winning all the races. Could you not run there?"

Pedro looked toward the mountains, hazy in the distance. He looked at his new watch again as if it would tell him what to do. Could he make it that far in so little time? He thought of how thin his uncle looked and remembered the blood he had seen on Tio's kerchief.

He gave Padre three pesos as a prayer offering for God's speed. "I will run to the mountain," Pedro said.

"Vaya con dios. Go with God, my son." The priest made the sign of the cross.

Hours later Pedro reached the mountain valley. Fog covered the orchard. He slipped beneath the grey, thick cover, looking for apples on the ground. Finding none, he'd have to climb the trees. Pedro easily scaled one, picking apple after juicy apple.

He stopped long enough to eat one, each bite crackling with crispness, the juice dripping down his chin. He wiped his mouth on his sleeve and watched the fog drifting around the trees. It gave Pedro an eerie feeling. . . like someone watched him.

He looked down and saw what he dreaded most. . . a Tarahumara Indian.

The youth, older than Pedro, frowned. "What are you doing stealing apples? They belong to the Tarahumara."

Pedro gasped and struggled to speak. "Uh? My uncle is sick. I've heard your apples have magical healing powers."

"They do, but my tribe expects me to protect the orchards. Our food is scarce this year. You cannot just take them. Do you have pesos to pay?"

Pedro thought of those he had given to the Padre. "No, but would your people miss a few apples? I can't go home empty-handed."

"I can't give you the apples, but if you can beat me in a race, you may pick some from the higher branches, the hardest ones to get," the Indian boy said, his eyes dancing.

This will be easy, thought Pedro. I've never lost a race. I'll soon be on my way with the apples.

"We'll run to the last tree in the orchard and back. Agreed?"

"Agreed," said Pedro. He couldn't help but smile. This boy was in for a surprise.

Pedro climbed down while the Indian drew a starting mark. In his running stance, Pedro waited for the boy's signal. The shout came fast. At first, Pedro couldn't get his legs going. But as they passed the first few trees, his energy returned and he caught the boy. At the turn back, they ran even.

Now I will put out everything I have in me, he thought. Near the finish line, Pedro sprinted. But to his surprise, the Indian sped ahead, his legs churning like wheels.

Pedro had been certain he would win. His heart sank. His disappointment tasted bitter. Now he would never be able to help Tio Elisio.

"You run like the wind. I'm the fastest runner in my village but you beat me," Pedro said.

"Haven't you heard? No man has ever beaten a Tarahumara. We run like an arrow speeding toward its mark, even for long distances. I knew you would not win and now you will go home without any apples."
"But my uncle may die without them," begged Pedro. "Is there anything I can do?"

"I could let you take some, but if someone from my village sees you, they would question me. We Tarahumara never lie. It is the code of our people. When I tell the truth, I will be punished for not protecting the orchards."

"Do you have something to trade? If I end up with something valuable, my people will understand."

Pedro's mind raced. He couldn't trade his watch, he'd have to try something else.

"I don't have much," Pedro said. "How about my sombrero? Or my gourd?"

"I have gourds to drink from and your sombrero would make me the joke of our village. Your trade must be better than that."

Pedro swallowed so hard his throat hurt. "I have a pocket watch with a gold chain. It tells perfect time." Pedro took a deep breath. His voice quivered. "I'll trade the watch for the apples." Would the boy accept his offer?

"Let me see this treasure."

Pedro dangled the watch as he watched the boy lick his lips. Pedro knew this would be enough.

"Amigo, you have made a wise trade. I will be admired in the village with something so fine." The boy held up the watch, his eyes dancing.

Even with his success, Pedro felt empty, like someone had pulled his soul from his body. He had given up his priceless gift, the one thing he promised to treasure always. He felt sick.

But then he looked at the apples. His spirit lifted. The magic apples held the promise of healing and worth the sacrifice. But what if his uncle didn't understand?

"I found magic apples, Tio. They hung in the orchards of the Tarahumara. They will make you well."

Pedro stumbled over the words as he told of the trade. Then he hung his head, afraid to look into his uncle's face.

Tio Elisio turned away, coughing into his kerchief. When he faced Pedro, tears welled in his eyes. "Pedro, what you've done is return my gift a hundredfold. You gave away your most valuable possession, to make me whole again. I will treasure the memory of your sacrifice always."

Pedro smiled. Now the apples could work their healing magic.