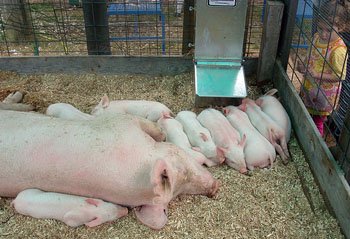 Five-year-old Tim liked playing in his shady fort. He liked riding his new speedy two-wheeler. He really liked to dig for squiggly wiggly worms, but his mother said he was too young to go fishing.

There was one thing Tim didn't like, and that was onions. Tim's mother put onions in hamburgers. She put onions in spaghetti, and he had to be very careful not to eat some by mistake. Today she had put them in baked beans. It took Tim a long time to sort out all the onions.

"Tim," said Mother, "hurry with those beans. Gramps is coming to take you to the farm."

"Cool!" Tim swallowed a big mouthful. "Are there kittens?"

Gramps had lots of smile wrinkles on his face. He even had a pocketful of candy wrapped in crinkly colored papers for Tim. "There are lots of babies out at the farm," Gramps said. Then he frowned. "Why are you pushing your food around?"

"Because," said Tim, making a little pile of onions on his plate, "I don't like onions."

On the way to the farm Tim told Gramps about his whole can full of worms, and his fort in the bushes, and about his shiny new bicycle.

They stopped first at the pig barn. Fat pink piglets squealed as they pushed their flat little noses at a big, grunty sow.

"They're so oinky!" laughed Tim. "What are they doing, Gramps?"

"They're looking for food," said Gramps.

Gramps laughed. "They're not old enough for corn! Piglets can only drink milk."

In the chicken house, fuzzy little chicks peeped and cheeped and hopped. They pecked at Tim's hand. "They're hungry! What do they eat?" he asked.

"Just very fine mash like this," answered Gramps, putting some into Tim's hand. "They're not old enough for hard corn or oats."

"Maaaa," said the calves. Tim liked the way they nuzzled their wet noses into his hand. "Do they eat hay?" Tim asked.

"Not yet. Just milk from their mother," answered Gramps.

In the hayloft was a nest of kittens like soft, fluffy balls of different colors. They made little squeaks and pushed their feet against mama cat's tummy.

"What are they doing?" asked Tim.

Gramps then took Tim home and stayed for supper. Tim's mother had made a big hot-dish with lots of good-tasting noodles.

"Are there onions in that?" asked Tim.

His mother sighed. "Yes. You know onions improve the flavor."

"Well, I wonder if I am old enough for onions."

Gramps smiled. "Try one and see."

Tim stuck a small piece of onion on his fork. He shut his eyes tight, opened his mouth wide, popped the onion in and chewed until it was gone. "Hey!" he said, opening his eyes. "That onion tasted just like the noodles! It felt different, and it chewed different, but it tasted really good!" He grinned. "You know what I think?"

Gramps and Mother laughed. Gramps said, "That's wonderful! And you know what I think?"

"I think any boy who's old enough for onions is old enough to go fishing. Would you like to go tomorrow?"

"Yes, you may," said Mother. "Now finish your supper before it gets cold."