No rhinoceros facts here, purely fiction! How the Rhino Got His Skin 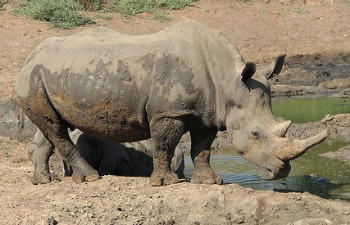 African Rhino with His Itchy Skin

Based on the Just So Stories of Rudyard Kipling

Once upon a time, a bushman was making a cake by his fire. He was so excited to eat the cake as it was his birthday! Suddenly from a nearby bush came a rhinoceros with a horn on his nose, two beady eyes, and very few manners. In those days the Rhinoceros's skin fitted him quite tight. There were no wrinkles in it anywhere and he had absolutely no manners! He had no manners then, and he has no manners now, and he never will have any manners. The rhino stood there snorting and stomping and the little bushman left his cake and quickly scrabbled up the nearest tree in case the rhino's temper flared! Well the rhino had smelled that cake cooking for miles and aimed to have it for himself, so he pierced the cake with the horn on his nose and ate it in one bite - then went away waving his tail proudly! The little bushman came down from his perch, angry and sad for now his birthday cake was in the rhino's belly and there was nothing left but some crumbs.

A few days later there was a heat wave that spread across Africa and it was so hot that everybody, even the animals, took off all the clothes they had. The rhinoceros took off his skin and carried it over his shoulder as he came down to the beach to bathe. He waddled straight into the water and blew bubbles through his nose, leaving his skin on the beach.

And the Rhinoceros did. He buttoned it up with the three buttons, and it tickled like cake crumbs in bed. Then he wanted to scratch, but that made it worse; and then he lay down on the sands and rolled and rolled and rolled, and every time he rolled the cake crumbs tickled him worse and worse and worse. Then he ran to the palm-tree and rubbed and rubbed and rubbed himself against it. He rubbed so much and so hard that he rubbed his skin into a great fold over his shoulders, and another fold underneath, where the buttons used to be (but he rubbed the buttons off), and he rubbed some more folds over his legs. So he went home, very angry indeed and horribly scratchy; and from that day to this every rhinoceros has great folds in his skin and a very bad temper, all on account of the cake-crumbs inside his skin.