My Beast and I 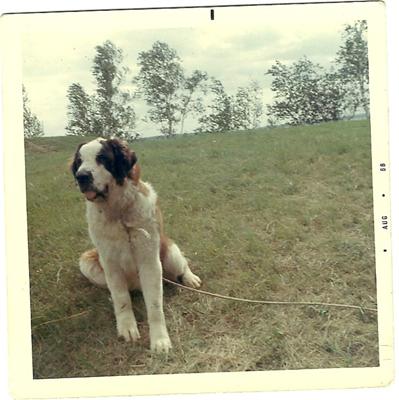 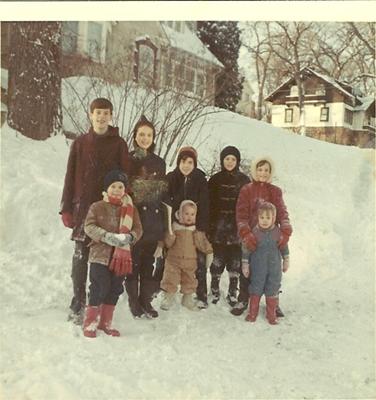 Behold. A world of wonder this white winters eve. A boy and his dog and lightly laughing snow that falls along the way from home.
Wrapped in heavy coat, hat, mittens and wooly scarf – a blue and white vista opens and reveals itself: the fresh snow reflecting the streetlamps as diamonds on a frozen arctic shore, where boys and beasts both best stay warm, stay alert. Stay close. To me now.

This massive beast – thick, caramel-brown fur on her back; white-chocolate white on breast, belly and paws. Long, velveteen soft black ears frame white-furred face. It’s snout black, too, with large, red-brown sad eyes, mouth open in panting, fearsome teeth and tongue a long, pink paddle. And laughing – of course she’s laughing. For this is her element, her weather, her way, her world.
She trots lightly on the crisp, frozen ground, bushy, white-tipped tail wagging lazily, her hind quarters moving happily in counter-rhythm; dipping her broad snout to lap up snow as she sashays along. See her pink and black gums as her mouth stretches over those ferocious teeth? Shaking off snow from her back, cocking her head to one side and sniffing, breathing, taking the world in – she’s laughing. Now wouldn’t you say she’s laughing?
Out the door we go, she with leash attached to chain collar, which I loosen – never choke or hurt a beast, you know – eliciting gleeful jumps on hind legs like a Shetland pony let loose in wintery pastures.
Down the steep hill we trod, towards the creek – her favorite place in warmer months – now frozen over and ripe for treading, for shuffling along in thick rubber boots, footprints of both boy and beast elongated with sliding motions, the snow giving way to show gray ice and sometimes, when it’s just warm enough, what lives underneath: minnows and sometimes – look! – the air bubbles of a passing fish. Fellow travelers of this, our frozen highway.

See here. Others, other boys and other beasts playing boot-hockey, bustling about with their sticks, their voices echoing off the massive gray walls of the high-bridge they play beneath. We pass by on the ice, my beast excited and wanting to frolic with the others, but I give her a tug on her leash and on we proudly go. For my beast is biggest, my beast is best.
She dances a bit on the frozen ice, looking behind her, and gives one thundering bark – just one – that echoes like a great bronze gong off the walls of the bridge.
Goodbye, she seems to say, I’ll be back tomorrow to romp and play. Will you still be here? My beast is biggest, my beast is loudest. But my beast wants to make friends with everybody she sees. She is in love with her whole winter world.

What’s that? Through the black and bare-branched trees, a flash, a dash through the snow. Other beasts live out here, you know.
A rabbit bounds through the trees, kicking up snow. My beast stares transfixed, then makes a mighty dash in persuit, yanking me nearly off my feet as I struggle to reign her in. No! No you don’t! Laughing and trotting now. What if we saw, say, a deer? She may drag me along after her on the ice! That would be fun! Funny and fun. How she chases us when we go sliding on our sleds and the tobogen, snatching our hats in her big, slobbery mouth as we squeal in delight. My beast likes to have fun. My beast likes a good caper, a good joke. She’s fun-ny, my beast is.

We walk along, the houses along the parkway brightly lit and twinkling in red, green, blue and white, for it is –oh! didn’t I say? – Christmas Eve. And when we return to the warmth and smells of my mother’s kitchen, taking off boots melting puddles in the hall, my father’s reminder to pluck the ice balls from between my beast’s toes, my brothers and sister’s voices laughing and bickering, rushing upstairs, now down, with rolls of festive wrapping paper, setting out bowls of peppermint bon-bons and peanut-brittle, the kitchen all abustle and places being set in the dinning room. But that will be later, much later. For now my beast and I have things to do, places to go. And through the steam of our frozen breath – as I take off her collar – we see it – a deer a large buck with six-point antlers crossing the creek bed. We are astonished, and my beast sits primly on the ice, ears perked and head cocked in wonderment. Crouching beside her putting my arm around her great neck and whispering,
“Did you see that? What about that, then?”
The deer passes with stately strides into the woods and we resume our progress, giddy and alert to what else might happen our way. And we don’t have to wait long, for just then just under the wooden foot-bridge appears not one, not two, but three large, gray – can they really be? – wolves, sniffing with their pointy snouts, trotting nimbly under a lamplight and just as suddenly as they appeared, they’re gone.
My beast wags her tail vigorously and gives an excited whimper, but the wolves have vanished. Well…I never! Wolves! What do you think about that!
My beast is terribly excited, and bumps me several times in her enthusiasm, nearly knocking me over.
She dashes now up the creek bank and stands stock still, staring. What now? What else might be about this fine winters night of ice and light? Who else in these woods is living? Oh, nothing would surprise us now and, well, yes, of course, there’s a big black bear. Lumbering along, pausing to stand straight up on hind legs to eat some berries from a tree branch.
My beast, she growls and whimpers, then boomingly barks, but it’s just for show and now she stretches her front legs and raises her rump in the air and – look at this silly dog! – lies down in the snow, eyes fixed on the bear some twenty yards away, now wandering off and glancing back at us as though annoyed with my beast’s beastly barking.
Scrambling up the embankment, pushing branches away from my face, powdery snow tumbling on my head and down the back of my coat collar, plopping down next to my beast, my friend, leaning forwards:
“Do you know what that was? That was a bear!”
She gives me two wet licks to my scrunched up face. I laugh.
There in that woods, there in the snow, my beast, my best friend, lies demurely with front paws outstretched, me sitting cross-legged next to her, petting her head and rubbing her velvety ears til my hand gets cold and I put my mitten back on. Across the road a huge Scotch pine, all glittering lights. A rustling above us and there, lit against the new moon, a falcon soars.

But we should be getting back. After all, it is Christmas Eve and my favorite dinner will be waiting: cheese fondue and baked cinnamon apples. Then later sit by the fireplace and anxiously await the opening of presents before going off to Midnight Mass. Whatever shall I get?

Slipping on her collar, brushing the snow off us, we make ready for home. And we feel it before we see or even hear it.
A low rumbling, like gathering thunder. We both look about, my beast and I.
And there. Through the trees. Coming down the frozen creek. In ranks three abreast. Horsemen come. Hussars in tall, black busbys and long blue overcoats, on fine white chargers. A dozen or so of them; and behind them a golden, gilt-edged sleigh – six great Shires pulling it, snorting and tossing their heads, their breath billowing before them.
We can only look on, amazed. For seated in the sleigh, a woman – completely covered in a shiny black fur blanket, golden hair flying behind her. Smiling, she is, face turned upwards to the moon.
To my beast and I, she turns, her face like that of a saint of old, laughing, beckoning. Bids us follow. And the captain of the guard raises his sword to us in salute, as they gallop past…

And now we really ought to be getting home. And my beast, now on her leash, turns and dances lightly onto the snow covered road. As though she sees these sorts of things every day.
She starts off at a trot, and I follow.
For she knows the way back home.