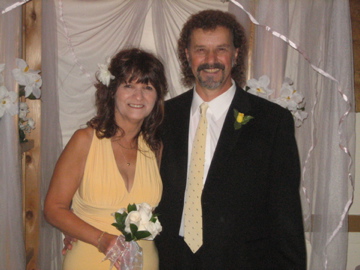 
A Story of Love Destined to Be!

This is the real 'true story' about how I met my Husband on a dating site on the Internet. It's the unbelievable story behind the story that is truly amazing, as it gives a glimpse of how fate and destiny come together in a divine way!

Here’s how it all started: I used to hang out at a country bar called the Club Palomino. I loved listening to good bands there, and enjoyed dancing to their country rock music. I used to drag my friend out to see my favourite band that played there often who were called Cheyenne. They were a great band and always packed the place, and my friend and I used to get up and dance to their songs. I was interested in the rhythm guitar player; to me, he was the best looking one, and I loved his voice along with his rhythm guitar sound. Yes, I had the 'hots' for him and I would “google eye” him as he played his guitar and sang while I was on the dance floor. I've always had this thing for bands as I play guitar too, and I always wanted to play in a band myself. Cheyenne played there quite often and were the best band at the Club Palomino. I would go there as much as I could just to hear them play, and of course, always watching my favourite player. The sad part about it was I used to see him with a blonde girl, not knowing if she was his girlfriend or wife.

After seeing them play there for a long time, the Club Palomino closed down. Yes, the club had been sold. Wouldn't you know it, a huge townhouse complex was put up and the club was gone. So were all the bands including my favourite band, Cheyenne.

When I first found out that the club was closing down, I wanted to approach Cheyenne; particularly the rhythm guitar player and ask where they would be playing in the future. But I didn't have enough courage to do that. I guess things happen for a reason.

As time went on, I met someone and got married. That was a mistake. Eventually we got a divorce. Afterwards, I started going out to bars again but got tired of it as I never met anyone that I felt was decent enough. I wasn't crazy about the bands playing at other bars either. Later, a friend told me to join a particular dating site on the Internet, which I thought I would never do. But, I thought I would check it out for fun as I’d heard so much about it from people who said that they’d even met their soul mates from that site. Surprisingly enough, I had a few dates, meeting in public places, but just didn't find the right one and thought that I never would from a dating site. I sort of gave up on it until one night, after getting home from a bar (which I hated), I went on my computer. For some reason I logged into that site again and was really glad I did, as I got an interesting email from a guy and liked his picture. I was also touched by the words in his email and that he was also interested in my picture and profile.

From then on we started emailing each other quite a lot through the safely of that site, which didn’t show your personal email address. It became obvious through our communication that we seemed to have so much in common. We continued writing and eventually started chatting on MSN, and we chatted for quite some time. He was Bulgarian and I was Hungarian, how common was that! We confirmed through our MSN chats that we really did have so many common interests, thoughts and feelings. It was really amazing. Our families even lived in the same town of all places. We chatted every night as often as we could.

And then, a miracle happened! We were chatting on our computers about music. Wow! We also liked all the same music and we both wrote songs. I told him that I liked country music and used to frequent a particular bar about 15 years before which had closed down. Of course he asked me the name of the bar back then. I told him the Club Palomino. He was really surprised and told me that he used to play there with his band. I wasn't sure whether to believe him or not. He said he would email me a picture of his band that was taken during one of their live performances there. I thought, 'yeah right' to myself as I waited patiently in front of my computer for the picture. Lo and behold, a huge picture came up on my screen: CHEYENNE, CLUB PALOMINO. I freaked! I couldn't believe it! It was him in the picture with Cheyenne. The guy I was interested in who was the rhythm guitar player in my favourite band! I was so shocked that I went crazy seeing this picture while giggling like a little girl alone in my apartment! It was just unbelievable! Like a miracle happened suddenly! Like a fairy tale!

We carried on chatting every moment we had for quite some time, and eventually he gave me his phone number. Then we started talking on the phone every night. It was just incredible all the things we had in common about everything! Yes, it really was too good to be true!

After about three weeks of talking on the phone every night, chatting on the computer and exchanging pictures, we decided to meet for a first date. I was brave enough for him to pick me up at my mother's place, as I had developed this trust in him by his voice and his honesty. I met him downstairs in front of my mother's apartment building. He got out of his car to greet me, and the first thing we did was look at each other and started laughing and laughing like crazy, and we couldn't stop laughing! He took me to the local Canadian Legion where we talked, had a drink together (still laughing) and got more acquainted.
Eventually we went into another room that had a small stage set up and sat down at a table. After a while, he asked me if I minded if he got up on stage to do a solo performance with his guitar, which he just happened to have with him. Hey, a man singing with his guitar was like being in heaven. So he got up on stage and started playing his guitar and singing in front of an audience which included me! That did it; I was hooked! And the guy I admired 15 years ago was performing in front of my eyes, and was my date! I was in Heaven!

We dated for about two years and it was absolutely wonderful. Eventually, we bought a condo together. Then, the final surprise! After moving into our condo, we looked out the window and to our astonishment what did we see? The office building of the dating site where we had met of all things, which wasn’t far away and was visible from our window! What a coincidence that was! We have been together since 2003, playing music, and still laughing! We really are two peas in a pod!

After we moved into our condo, I invited my female friend over who I was with at the Club Palomino 15 years earlier, and he also remembered seeing us dancing while his band Cheyenne played. He also remembered seeing me standing at the bar at times while I was watching him on stage. I also used to watch him go to the bar for his coffee, and I know our eyes met each other's way back then. It sure is strange crossing one another's paths some 15 years earlier — and now, being together in a different time in the future and remembering all the small details from back then!

And by the way, that blonde girl he was with at the Club Palomino was the girl he eventually married which lasted eight years. He went through a brutal divorce. He did tell me that when I first saw him at the Club Palomino 15 years earlier, that I should have approached him just to say ‘hi’ as things may have turned out differently. Its funny how life is; it seems that it just wasn't meant to be back then. Fate had finally brought us together and we truly are “Soul Mates”. We got married on November 21, 2009 and are still happy as ever!