LIGHT ON A SNOWY DAY 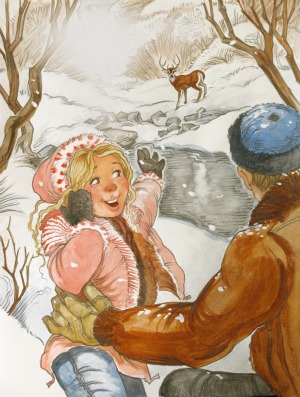 A year before that December day an injured baby deer had been abandoned in the woods behind the Dotson’s home. So weak was the little deer, that he hadn’t the strength to run from Maggie’s father when he approached him.

As he carried the little deer towards their home, Maggie rushed outside and greeted her father with great excitement.

“Wow, a deer! What happened to him, Daddy?” asked Maggie.

“Well, I’m not sure how he managed to do it, but he mangled one of his hoofs pretty severely,” Mr. Dotson said.

Maggie leaned in to take a better look. “Poor little reindeer. Can we keep him, Daddy?”

“First of all, he’s a white¬-tailed deer,” laughed Mr. Dotson. “And no, we can’t keep him. He’s a wild animal, Maggie. I’ll do everything I can and then he’ll have to be set free.”

While gently rubbing the little deer’s nose it licked Maggie’s hand, which made her laugh. Mr. Dotson smiled and just shook his head. He proceeded to carry the little deer to the garage.

After Mr. Dotson carefully placed the little deer on the floor, he asked Maggie to go to the house and get his medical bag. The little deer was in luck. He was being attended to by James Dotson, local Veterinarian.

In what seemed like two seconds to Mr. Dotson, Maggie rushed inside the garage carrying his medical bag, and a handful of lettuce she had grabbed from the refrigerator. Maggie handed her father the bag, and then placed the lettuce by the little deer’s mouth - but he wasn’t interested.

“I know what he needs,” Maggie said. “He needs carrots, because that’s what Santa’s reindeer like to eat.”

“He’ll get plenty of food, alright. Right now he just needs to have his hoof cleaned and bandaged.”

It was dark outside and the temperature was quite cold. Despite her reluctance to leave the little deer, Maggie’s father convinced her that he would be safe in the garage. Maggie insisted that her father return with carrots and warm blankets for him. He promised he would.

After he turned off the light in the garage, Maggie turned to her father and said, “I’m going to name him Paxton, Daddy.”

“That’s a fine name for a deer, Maggie.”

“You really think so, Daddy?”

“Are you sure Paxton is going to be alright?”

“He’s going to be fine, Maggie. Now let’s get inside where it’s warm.”

Later that night Maggie could barely sleep. She kept getting up to view the garage from the window in her room. Even though she couldn’t see Paxton, looking out at the garage comforted her.

After she awoke the next morning, Maggie rushed down the stairs and was heading for the front door, when her mother asked her where she thought she was going.

“Not before you eat your breakfast, young lady.”

To the dissatisfaction of her mother, Maggie wolfed down her breakfast. She had two eggs, scrambled, and a piece of toast. Her glass of orange juice never left the table.

“Where’s Daddy? Is he in the garage with Paxton?”

“Yes, he’s in the garage tending to your little….” Before Mrs. Dotson had finished her sentence, Maggie was out the door.

As Maggie darted into the garage she nearly knocked her father over.

“Is his hoof all better now?”

“Well, it’s going to take time to heal. Right now he just needs to work on getting his strength back.”

Paxton was very timid as Maggie approached him.

“He’s still not used to us. This is a strange place to him.”

But with time and persistence, Maggie finally gained the little deer’s trust. In fact, he was soon eating carrots right out of her hand. And when the holidays were over and Maggie was back in school, she never left without feeding Paxton first thing every morning.

Mr. Dotson could see the bond that his daughter felt for the little deer. That scared him, though, because he knew Maggie would never be able to say goodbye. So when his hoof had finally healed, Mr. Dotson came home early one afternoon to set Paxton free.

When Maggie learned that her father had released Paxton, she was devastated. Mr. Dotson had believed it would be easier on Maggie that way, but he was wrong. His daughter never forgot the little deer and she called out to him every day, hoping he would hear her.

In time, though, Maggie did come to understand that deer are not like puppies, or kittens. She understood that wild animals, even little deer, need to be in their natural habitat. But that didn’t change how much Maggie cared for and missed Paxton.

Between the Dotson’s home and acres of woods lay a pond that always froze-solid in the winter months. It was a large pond, and many children would come over to ice-skate on it. But the pond hadn’t frozen over that winter yet, because the weather had been warmer than usual.

As Maggie stood by the pond one afternoon, it started to snow. Mr. Dotson saw Maggie through the kitchen window and could tell she looked upset. Without having to ask what was wrong, he knew.

Mr. Dotson felt guilty about having not been more supportive of his daughter’s belief that she would see Paxton again. And even though he didn’t want to give her false hope, he realized that no longer mattered. Maggie was hurting and he wanted to help.

As Mr. Dotson walked outside to greet his daughter, he carried a pair of binoculars with him. He and Maggie would spend the next couple of hours in the woods, where they searched for deer tracks in the newly fallen snow. But as Mr. Dotson had expected, their search came up empty.

Maggie sadly nodded at her father, who was now carrying her because her toes felt like popsicles. But then something happened! As they were exiting the woods, two deer were standing next to the pond. One of the deer was female, and the other was a buck with antlers. Based on the size of the deer, Maggie never considered that either could be Paxton. But her father quickly reminded her of how much Paxton would have grown over the past year.

As Maggie and her father edged closer to the pond, the doe quickly abandoned her attempt at a drink of water. The buck turned and saw them staring in his direction. But the buck stood still, barely flinching. Maggie, who was no longer being held by her father, watched as he peered through his binoculars. As Mr. Dotson got a closer view of the buck, something stood out through the falling snow; it was the markings above the buck’s eyes. He handed the binoculars to his daughter, and whispered if she recognized anything special about the deer with antlers. Maggie immediately recognized the markings on the buck as Paxton’s. With great excitement, Maggie called out to him, and then the two deer darted away. She continued to call out to Paxton, who briefly stopped in his tracks and looked back at her. After a few moments, he darted off again to catch up with the doe and then disappeared into the woods.

At first, Maggie felt happy, but her happiness soon turned to sadness. She felt as if she had lost Paxton all over again. But her father explained to her the gift she had received in getting to see him once more.

As Maggie stood next to her father, with the snow still falling, a carp jumped making a large splash in the pond. It had been a long day. They went inside to unthaw from the cold.

Many years later when Maggie told this story to her grandchildren, she reminded them that the best Christmas presents often aren’t found under a tree, but in your heart.

**About the Author**
Artie Knapp is the author of many published works for young readers. His award-winning children’s book Stuttering Stan Takes a Stand was endorsed by The National Stuttering Association and the American Institute for Stuttering. A frequent contributor to the Detroit Free Press’ Yak’s Corner, Artie’s children’s literature has been featured in over 100 publications across the world. He is a member of The Society of Children’s Book Writers and Illustrators, and graduated from Ohio University . Artie lives in Ohio with his wife Priya and daughter Alanna. To learn more about Artie and his work, please visit www.ArtieKnapp.com.