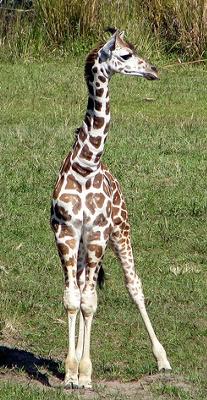 Read along or listen to Joey's Big Blue Sky.


Joey the giraffe bounced out of bed, touched his

toes, and swiveled his neck.

He was ready and had a plan. His mommy’s birthday was

almost here and he was determined to get her something

special. She always said she loved him as much as the

big blue sky. So… he knew that (or at least a piece of

that) would be the perfect present. His only problem was

he couldn’t quite reach it. So today he was going to

If I stretched my neck a little longer… I bet I

could reach the sky.

Joey looped his neck around the tallest branch he could

find, then lifted all four legs off the ground at the

But the only thing he got was a sore neck.

Maybe I should try my legs.

Joey sat down on a large rock. Using his two front legs,

he grabbed a back leg and PULLED with all his might.

He pulled so hard he lost his balance and tumbled right

off the rock, landing flat on his back.

Joey tried again. This time he tugged on the other leg.

Joey shook it off. Looking around, he noticed some

trees almost touched the big blue sky. If I climb the

tallest one, I could reach it. Monkeys do it all the

time, how hard could it be?

Using his two front legs he hugged the tallest tree he

could see. On the count of three, he jumped and wrapped

his back legs around the base of the tree and climbed up.

But…. instead of climbing up, he quickly slid down.

for a new plan.

“Birds!” he yelled, watching a flock soar through the

If I could fly, I would definitely touch the sky.

The more he thought about it, the better it sounded.

Backing up to get maximum speed, he ran cheetah fast,

right off the ledge…

For a brief moment, he felt the wind beneath his legs.

Until… SPLAT! He fell flat on the ground.

Joey limped home. Every part of his body hurt and he

still didn’t have a present.

Worried, his mommy nuzzled his head. She questioned

him with her big brown eyes. She had never seen little

Joey so sad. But Joey just shook his head and went right

The next morning, he bounced out of bed with a new

plan. He gathered his art supplies and colored a paper

blue. In the middle of the picture he drew a red heart.

Smack in the center, he wrote in his very best writing:

I love you as much as the big blue sky.

It was the best present she ever got.