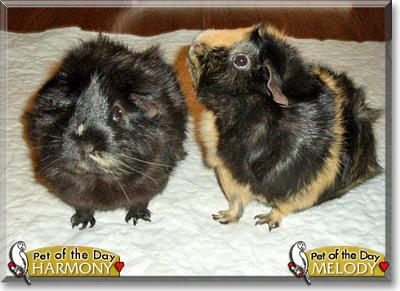 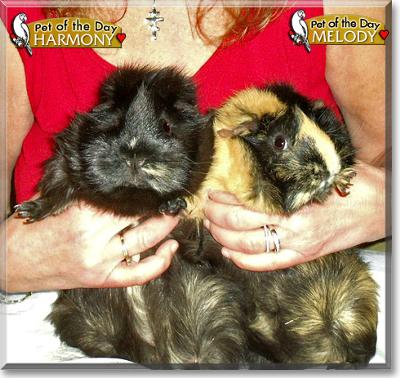 I never really knew how smart guinea pigs are, and that they can actually have you wrapped around their little finger by their cute demands.

We adopted two guinea pigs, mother and daughter of 1 and 3 years old in October of 2011. After buying a house, we wanted to get a pet, and decided against getting a dog for now. Instead, we are proud parents of two loveable guinea pigs, Harmony and Melody. Hey, you don’t have to walk them at all hours of the day or evening!

Our two adorable piggies have out smarted us in a lot of funny but very cute ways. They know our schedules for eating, and by this what amazes me is that they know of the exact “timing” of different hours for our meals, and for them to get their pellets and their treats. I’m normally the first one up, get the coffee on and check up on our guinea pigs. It’s really funny to watch them at that time as they are both standing up on their little front legs on their empty bowl looking at me, and squealing for me to give them their pellets. After eating their pellets, they will have a nap for a while as they somehow know my Husband will be up shortly. Our piggies know what they will get from him; their treat of different fruits. Each morning, my Husband cuts up fruit for his breakfast, and they actually know that it’s him in the kitchen preparing this, and not me. While he’s cutting up fruit, our piggies will be watching him and squealing and running around like crazy. When I go into the kitchen getting my breakfast, they don’t even make a sound! They even hear me opening the fridge door where their fruit is kept, but they are silent. When I’m preparing my breakfast, our guinea pigs know that I’m not preparing fruit for myself. They know I’m the one to give them their pellets in the morning. It’s so amazing how they know each of our meal schedules and they know who they are getting their fruit and pellets from.

My Husband and I are night hawks, and we do our own thing with our music in our studios after our late dinner. After dinner, I will make our little piggies their salad plate. They know what I’m preparing in the kitchen for them while they are watching me, as I am also watching them for their reactions. But they are silent again, just watching what I’m preparing to give them at a later time. It’s amazing that our piggies know they will not be getting their salad plate at this time, but instead later in the evening. Even though they watch what I’m making for them, they don’t make any of their squealing sound affects.

My Husband and I normally meet in the TV room around 1:00 a.m. and we get comfortable on the couch to watch TV. Wouldn’t you know it, our piggies are looking at us from their cage waiting patiently, and we know what they are waiting for. They will look away from us on and off while nibbling on their hay for a while. Then a short time later, their high pitch squealing begins with the amazing sounds of opera singing, or what almost sounds like an electric guitar playing. We just love these incredible loud sound effects from them. They run around in their cage like crazy, as they know it is almost “time” for their salad plate. Each time this happens, we glance at the clock, and their timing is normally the same time of around 1:30 a.m. every night; the time that they demand their salad plate which is truly amazing. As soon as I get up to go into the kitchen, our piggies go crazy, squealing again in their high pitch sound as they know I’m getting their prepared salad plate for them to eat. I will walk towards their cage, and by this time they are running around in their cage with excitement, standing up on their little hind legs begging and waiting for me to put their salad plate down in their cage. They are very happy at this time while guzzling down their salad.

This unusual knack of them knowing the exact time they will get their final treat of the night before my Husband and I go to bed is incredible. It boggles our minds on how they know of this unusual timing thing that they have developed with us. There have been times though when we both messed up and got off schedule. They knew we messed up by showing us their anger, which is expressed by them pushing their little beds up to their empty bowl, letting us know it is empty and time to fill with pellets. They both really know they are the boss of the house!

When it’s time to pick them up, they will run and hide from us which is normal for guinea pigs. When we pick one up, the other piggie will know it is her turn next. She will hide in every place possible so she won’t be picked up but once we do pick her up, she will calm down and be ready for floor time that guinea pigs need out of their cage for exercise. They will play and run in and out of a tunnel on the floor which is so cute to watch. Oh yes, they love chewing on the box as well which is good for filing down their teeth which constantly grow.

One of the funniest moments we’ve had with our piggies was when we put a large carrot on the floor and took them out of their cage to see their reaction. Oh my God! They started having a tug-of-war, grabbing it from one another and constantly grabbing it from each other’s mouths. It was so hilarious to watch that we were laughing hysterically with tears in our eyes. We just had to video tape their performance, and posted it up on YouTube. It can be viewed by goggling “Melody & Harmony (Our Guinea Pigs”). If you want a good laugh, it’s certainly entertaining and worth watching!

If anyone is concerned about getting a dog, I highly recommend guinea pigs as the next best pet to a dog. They are like little puppies when you hold them and so loving. They are very smart little animals, and once they get to know and trust you, they are wonderful to have as pets which we have experienced for the first time owning our guinea pigs. They are like having little babies, and that’s exactly how you have to care for them. Of course I would recommend getting two piggies of the same sex, as they are very sociable animals and will tend to get lonely or depressed if you only have one guinea pig. Eventually, they will out smart you and will be very demanding in a very nice cute way! They are certainly entertaining pets we have adopted. We just love our two piggies, Harmony and Melody!