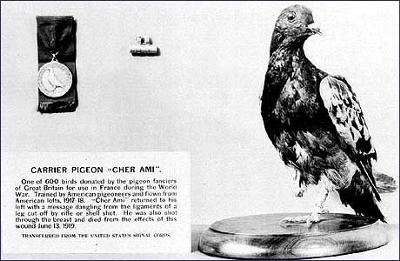 Cher Ami at the Smithsonian Institution

Listen and read along to Birds in Battle and meet a very unlikely hero!

When you hear the word ‘hero’ who do you think of? Perhaps Superman or Spiderman may come to mind? What about a pigeon? Did you ever think a bird could be a hero, too?

There are approximately three hundred species of pigeons and they live on every continent except the Antarctica. They dwell in the busy streets of the city and country meadows alike. Some people consider them true companions, while most view them as ‘winged rats.’

In World War I and II, however, these birds were highly regarded and valued. Brought with the soldiers into battle, homing pigeons were used to carry messages when other communications failed. In fact, they’ve been credited for saving thousands of soldier’s lives. Perhaps the most famous pigeon of them all was Cher Ami (‘dear friend’ in French.)

The year was 1918. A World War I. Battle in the Argonne Forest of France was raging. The ‘Lost Battalion,’ part of New York’s 77th Division, had been cut off from the rest of the troops.

They were trapped and surrounded by the enemy. To make matters worse, they were being fired upon by their own American Artillery who didn’t realize they were there.

Major Whittlesey, of the ‘Lost Battalion,’ had already sent out two pigeons carrying messages to American commanders. The first message read..."Many wounded. We cannot evacuate." The second message was.."Men suffering. Can support be sent...?" Unfortunately, both these pigeons were shot down before they could deliver.

Only one pigeon was left in the cage. It was Cher Ami. He was their last hope. After writing this simple message..."Our own artillery is dropping a barrage directly on us. For heaven’s sake, stop it," Cher Ami was released.

The troop watched anxiously as the carrier pigeon went to work. He rose into the sky, the little, silver canister with the message secured safely to his leg. Suddenly, a barrage of shots were fired. Bullets whizzed through the air all aimed at Cher Ami. The German soldiers were determined to stop him.

The carrier pigeon had been trained to return to his coop, not dodge bullets and soon he was struck. He began to plummet to the ground while the men of the ‘Lost Battalion’ watched on in dismay.

Then, as if a miracle occurred, Cher Ami spread his wings and began to gain altitude. Higher and higher he rose out of artillery range and flew the 25 miles back to safety. Twenty-five minutes later a soldier heard the buzzer on the coop, signaling the pigeons arrival. When he found Cher Ami he was lying on his side, covered in blood. He was blinded in one eye and had a quarter size hole in his breast bone. His leg was shattered and hung by mere tendons. Remarkably, from that nearly severed leg dangled the silver canister. Even though Cher Ami must have been in tremendous pain his great determination wouldn’t allow him to give up. He saved more than 190 soldiers lives that day and became a hero.

The medics did their best to take care of the wounded pigeon. It’s been said a wooden leg was even carved for him. He was retired and sent back to the United States by boat. When he arrived magazines and newspapers told of this brave little bird’s story. He even received the French ’Croix de Guerre’(Cross of War) with a palm leaf, medal for his services.

Unfortunately, Cher Ami died from wounds received in battle, on June 13th 1919, less than a year after his 12th mission. However, if you’re ever in Washington DC, stop in the ‘National Museum of American History, Smithsonian Institution.’ There you’ll see Cher Ami preserved beside his medal, standing proudly on his one good leg. A true hero.

WHICH WAY TO THE COOP?

Unlike humans, pigeons can’t ask for directions. So how exactly do they find their way home? That’s a question scientists are still researching.

Some believe that pigeons are able to use the sun as a guide along with visual landmarks. Others believe that it’s a keen sense of smell and eyesight. Still others believe that they use the earth’s own magnetic field like a compass. It’s been discovered that pigeons have a mineral known as magnetite in the upper part of their beaks. Magnetite is the same mineral as the first compasses were made from.

Perhaps it’s all these things combined that give this not-so-ordinary bird its extraordinary abilities.