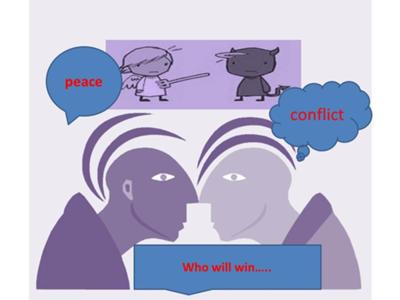 Billy was a nine year old robust child, with dark brown hair and a few freckles, loved his life, his friends and football. He enjoyed all types of adventures and going to the park to play was always fun. It was when he was surrounded by friends and activities he would excel and enjoy life most.

At home alone in his bedroom, he tried his best to understand the conflict within his mind. Billy wanted to know the meaning of the continuous bickering of the two voices inside his head. He often wondered why he had to endure this conflict.

It was Saturday and Billy was getting dressed to go to the park and play football with his friends.

"Little Billy, come downstairs, we have a visitor," His father called.

Billy was furious. If he calls me little again, I will scream, he said to himself. And then the voice inside his mind told him to shout back at his father and tell him he is not little. The evil voice continued to entice him to do more wrong. The gentle voice kept telling him to stay calm and walk in love. He grabbed his head and shouted at the two voices to stop. He took a deep breath and walked downstairs, he did not want to keep his dad waiting and the agitation of the voices continuing to tell him shout, tell him you hate him and the other continuing to tell him walk in love, be kind and smile, confused him.

"Good morning dad," Billy said as he walked into the lounge area.

"Little Billy, you remember the pastor, he is here to take you with him to the church."

Billy greeted the pastor and asked him why he needed to go to the church. The pastor told Billy all the children would be there as they are planning a fun day and needed to tidy up the grounds in preparation for next week's family day. Billy told the Pastor he had a game of football to play and would come over as soon as he had finished.

"Now Little Billy I think it is more appropriate for you to go with Pastor you can always play football another time."

"Very well, I will get my jacket and be back in a moment." He replied and walked away.

Billy went up to his room and closed the door. He grabbed a ball and threw it at the window. The glass broke and the evil voice in his mind enticed him on to throw more items, to mess up the room and break everything. The good voice told him not to listen to the evil voice, but to remain calm and smile. The conflict in his mind continued and when his father entered the room, Billy knew he was in trouble. The evil voice laughed.

"What on earth is going on, why did you break the window? Young man, explain your actions." His father in a stern voice said.

"Father, I am sorry, I picked up the ball and meant to throw it into the toy box. It was an accident." He lied.

"Well you are grounded, and you can forget about going anywhere for the next two weeks." He said and stormed out of the room.

Billy sat on the bed, holding his head in his hands and stared at the floor. The evil voice said, Billy Little Billy, you are in trouble and laughed.

"Oh keep quiet; it is because of you I am in trouble I am not going to listen to you anymore." He shouted.

The good voice told Billy he was a kind and loving child and he would become a great person if he would listen to the good advice given. Again the evil voice wanting to vent his opinion continued to tell Little Billy he should not be a loving kind person, he would live a boring life but if he followed his instructions he would have lots of fun and become a hero people will fear him and he would have power.

Billy shook his head and told the voices to stop; he did not need any of their advice and from now on he would do what he thought was right. He told the voices to go away and leave him alone. They refused and told him they would be with him for all his life. Billy was angry, and the evil voice coaxed him on to continue venting his anger and again the conflict over good and evil continued. Billy was confused. He stood up and went down stairs. He found his father sitting in the lounge reading a newspaper.

"Father, can I please speak to you for a few minutes." Billy asked.

"I am still angry with you but come and sit here beside me and tell me what is bothering you."

Billy sat down next to his father and looked up at him.

"Dad, I need help, I always have these two voices inside my mind, telling me what to do."

"Well what do they tell you Billy?" His father intrigued asked and put down his paper.

"Yes, Billy, we all have two voices telling us what to do, just as you do, I know it can be confusing, but the best advice I can give you is to choose the good voice and then the conflict will stop."

"Billy, in every man, there are two voices fighting with each other all the time for leadership and domination. The one is evil; he wants to kill and destroy and seek revenge all the time. He is only interested in his survival. The second voice is gentle and kindhearted. More like a shepherd and always wanting to help others to find peace. He enjoys sharing whatever he has as well as his affection.'
Billy listened attentively as his father told the story. He turned around and looked at his son.

“Which voice do you think will win?” Looking at his son he asked.

“The one you feed.” His father said.

Billy did not understand and asked his father to explain. His father continued and told him if he fed the evil voice, his life would be filled with bad situations, but if he looked after the gentle voice, he would find happiness and joy.

"Father, do you mean if I choose the good voice, and continue to ignore the evil voice, I will really find happiness and joy."

"Yes, Billy, you will but remember it will be difficult in the beginning. The conflict in your mind constantly waging the war of good and evil will be there, but the more determined you are to succeed the easier it will become."

"Yes father, I do understand and from now on, I choose to do good only." He said and hugged his dad.

Billy got up and stood in front of his dad with a serious look upon his face.

"Dad, I don't mind if you call me Little Billy." He said and smiled.

"You will always be my little boy," he said with a frown upon his face.